According to a recent study, 68% of business leaders feel their cybersecurity risks are increasing. This rising level of caution is for good reason since the average cost of a data breach is $3.86 million.

But what steps can your enterprise take to gain peace of mind knowing your cybersecurity posture is continuously fortified against cybercriminals?

One approach is known as purple teaming and significantly helps your organization protect its data, which, in turn, protects its bottom line and reputation.

What Is Purple Teaming?

Purple teaming is a cybersecurity testing exercise in which a team of experts takes on the role of both red and blue teams with the intention of providing critical insight into a company’s cybersecurity posture. Essentially, it’s an activity that simulates a real-world cyber attack across multiple levels of an organization to determine the strength of its network.

By sharing intelligence data between the red and blue teams during the purple teaming process, enterprises can better understand how threat actors might interact with its information, whether digital defenses hold up or if the attacker is successful. By mimicking a legitimate cyberattack through a series of red team scenarios, the blue team has the ability to configure, tune, and improve an enterprise’s detection and response capability.

What Are the Roles of the Red Team and Blue Team? 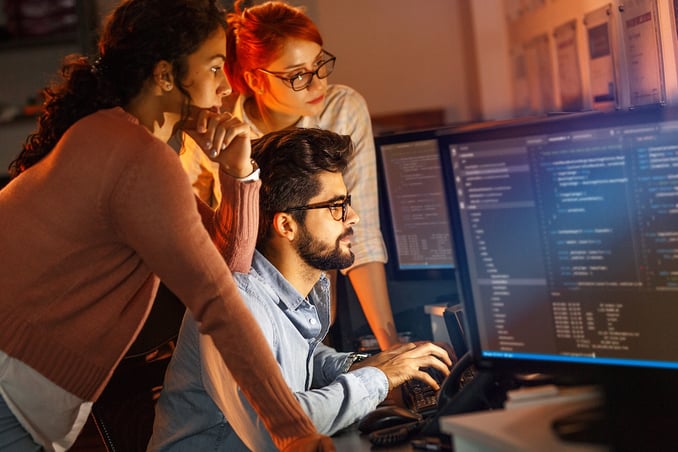 For example, an objective might be to determine whether a sophisticated external attacker could gain access to an internal database system and acquire a specific set of sensitive records. In this instance, the red team would simulate an external threat actor and determine whether they could find a series of exploitable vulnerabilities that would cause them to exfiltrate sensitive data from the target database.

On the other hand, the blue team is expected to act as the network’s defenders; they need to defend against every single attack that is launched by the red team. This includes necessitating access to log data, SIEM data, threat intelligence data, and being able to network traffic capture data.

The blue team also has the responsibility of analyzing vast swaths of data and intelligence to detect the proverbial needle in the haystack and come up with a defense strategy on the fly and for the future.

Purpose and Benefits of Purple Teaming

Effective vulnerability management is crucial for any successful modern business, and there are many benefits of performing a red team engagement, including the ability to:

Understand Where Vulnerabilities May Live Within Your Network

Though it might be hard to admit, every system has some sort of vulnerability within it, especially when 95% of cybersecurity breaches are caused by human error. Why wait for cybercriminals to find and exploit these fissures, which can cost your enterprise millions of dollars in financial and reputational damage?

One of the fundamental purposes of purple teaming is to stay ahead of these hackers so you can secure your enterprise on every level before they wreak havoc on your operations.

Through purple teaming, your enterprise acquires experience and information on how a potential adversary would be able to access your infrastructure, exploit vulnerabilities found along the way, and ultimately accomplish their objectives. With this knowledge, you can better understand the security posture of your environment and identify ways to improve it. As the saying goes, knowledge is power!

How Does Purple Teaming Work?

There are three primary components of purple teaming:

During this initial phase, the red team will attack the network using numerous angles with one goal in mind: don’t get caught. The scope—or objective—of this engagement is set before the attack; whether it’s stealing sensitive PII or customer data, the red team will have a predetermined objective in mind throughout the engagement to meet your enterprise’s goals and needs.

By attempting to gain reconnaissance through virtual and physical access to confidential data within your organization, preliminary gaps can be identified.

Unlike many other offensive security engagements assessments that can be performed on your network, this purple team engagement is meant to be kept under wraps from the majority of your employees. The red team will attempt to stay covert in order to complete the overall objective, thoroughly testing your security defenses and blue teams; only a handful of executives and the blue team will be aware of the ongoing assessment.

If the blue team identifies attack activity, they’ll contact the red team to verify it’s not a real attack. Once verified, the red team will continue the attack while the blue team will notate how they were detected and keep monitoring to see what other activity they detect.

Since attackers don’t stop hacking companies, even when they’re discovered, neither does the red team. This will give the blue team an important opportunity to monitor and observe attacker behavior while devising new strategies to detect and block that activity, while also knowing this is a simulation. It’s the best of both worlds.

Compuquip’s team of experts deploy their expertise during our engagements and apply this human factor to each purple team engagement to help hone in on all outlying possibilities of an attack.

As we gain reconnaissance into your environment and uncover security vulnerabilities, one of our main goals during each engagement is to help you close each gap found by creating a tailored solution to fill it! Whether your organization is debating which vulnerability exploitation service to go with or has questions on how we can begin our advanced purple teaming engagement, reach out to speak with one of our experts today!

Did you know that cybercrime has increased by over 600% since the start of the pandemic in 2020?..

3 Ways to Improve Mobile Device Security to Protect Your Enterprise

At least 40% of the world’s mobile devices are inherently vulnerable to cyberattacks. Do you have..

When it comes to tackling a large plan or course of action, it’s helpful to break it down into..