Many companies suffer from numerous network security problems without ever actually realizing it. What’s worse, when these problems go unresolved, they can create openings for attackers to breach a company’s security infrastructure to steal data and generally wreak havoc.

There are far too many potential problems to cover in one online post in detail. So, this article will cover a few of the most common network security problems and their solutions to help you cover your bases.

Problem #1: Unknown Assets on the Network

There are many businesses that don’t have a complete inventory of all of the IT assets that they have tied into their network. This is a massive problem. If you don’t know what all of the assets are on your network, how can you be sure your network is secure?

According to data cited by the Harvard Business Review, for the year of 2016, “60% of all attacks were carried out by insiders.” Whether it’s because of honest mistakes (accidentally sending info to the wrong email address or losing a work device), intentional leaks and misuse of account privileges, or identity theft arising from a phishing campaign or other social engineering attack that compromises their user account data, the people inside your business represent one of the biggest security problems you’ll ever face.

Because these threats come from trusted users and systems, they’re also among the hardest to identify and stop.

However, there are ways to minimize your risk in case of an insider attack. For example, if your company uses a policy of least privilege (POLP) when it comes to user access, you can limit the damage that a misused user account can do. In a POLP, every user’s access to the various systems and databases on your network is restricted to just those things that they need to do their jobs.

As noted in one CSO online article, “around 6,300 unique vulnerabilities appeared in 2015. Symantec says that only 54 of them were classified as zero-days.”

This is because when a “zero day” exploit is used it can be discovered—becoming a known issue that the software vendor can begin working on. The more often the exploit is used, the more likely it is to get discovered and patched. Also, it takes a lot of effort to independently discover a completely unknown vulnerability in a system.

So, attackers generally prefer to stick to known exploits. In fact, as noted in the CSO article, “The Verizon Data Breach Report 2016 revealed that out of all detected exploits, most came from vulnerabilities dating to 2007. Next was 2011.”

In other words, vulnerabilities that were almost a decade old accounted for most of the breaches in 2016. Let that sink in.

The easiest fix for this problem is to maintain a strict schedule for keeping up with security patches. Also, gradually changing the programs and operating systems on your network to make them the same can simplify this process. For example, if every system is Windows-based or Mac-based (rather than a hodgepodge of Mac, Windows, Linux, etc.), then you only have to keep track of Mac OS or Windows OS security patch schedules and alerts.

Problem #4: A Lack of Defense in Depth

Eventually, despite all of your best efforts, there will be a day where an attacker succeeds in breaching your network security. However, just how much damage this attacker will be capable of depends on how the network is structured.

The problem is that some businesses have an open network structure where once an attacker is in a trusted system, they have unfettered access to all systems on the network.

If the network is structured with strong segmentation to keep all of its discrete parts separate, then it’s possible to slow down the attacker enough to keep them out of vital systems while your security team works to identify, contain, and eliminate the breach.

Problem #5: Not Enough IT Security Management

Another common issue for many companies is that even when they have all of the best cybersecurity solutions in place, they might not have enough people in place to properly manage those solutions.

When this happens, critical cybersecurity alerts may get missed, and successful attacks may not be eliminated in time to minimize damage.

However, finding a large enough internal IT security team to manage all of your needs can be an expensive and time-consuming process. Qualified professionals are in demand, and they know it.

To build up IT security staff quickly, many businesses use the services of a dedicated partner such as Compuquip Cybersecurity. This allows these businesses to access a full team of experienced cybersecurity professionals for a fraction of the cost of hiring them full-time internally.

Some businesses use these cybersecurity solutions partners to shore up their IT security departments in the short-term while they’re preparing their own internal cybersecurity teams.

Need to solve your network security problems quickly? Contact Compuquip Cybersecurity to see how we can help you! 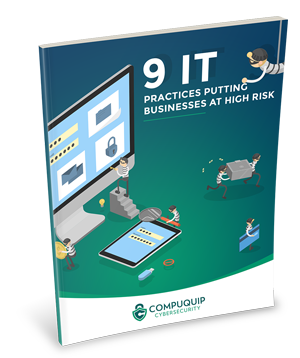 Discover potential fixes for each of these practices to maintain a strong cybersecurity posture.

How a Network Security Audit Works & Why It’s Important

When most people hear the word “audit,” their first reflex is to cringe. Usually, it means having some outside team come in to ...

When it comes to network security issues, an ounce of prevention is worth a pound of cure. Waiting for a threat to strike ...

Be Proactive about Network Security Updates!

Here’s a quick public service announcement from the whole Compuquip team: “You should be more proactive about your network ...