Being a part of the Compuquip team means more than just having a spot on a team—it means being a part of a family, a close-knit circle of friends. And, as a family-owned and operated business, we all care about each other. 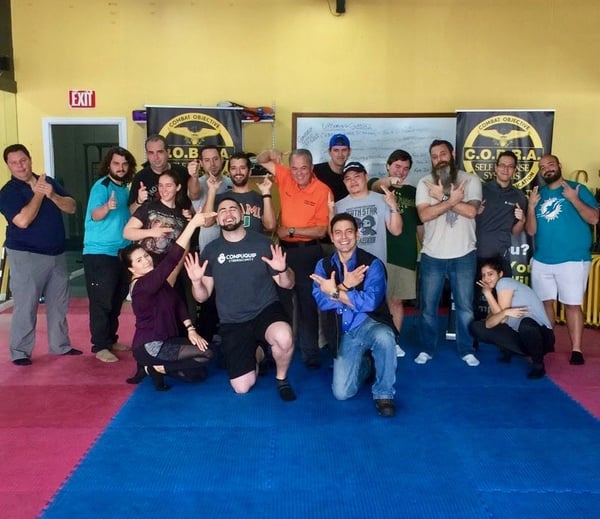 With so many “active shooter” headlines making the news over the last few years, the Compuquip team thought that taking some self-defense lessons could be a good thing to do. The idea was to provide some tactical knowledge to prepare ourselves, our friends, family, and customers with valuable information that could potentially save lives in an emergency.

So, the Compuquip team signed up to attend a C.O.B.R.A. Self-Defense class—along with some friends, family members, and customers.

What Did the Compuquip Team Learn at the Class?

The class covered a wide range of self-defense topics, including specific self-defense techniques, understanding an attacker’s motives, and even a “myth busting” session that dispels some of the falsehoods about self-defense that many people take for granted.

Some of the physical techniques that the Compuquip team learned at the self-defense class were: 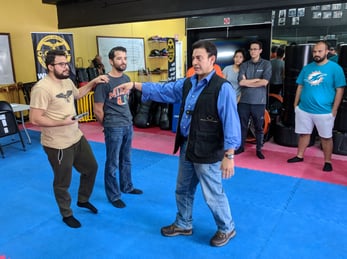 These lessons were accompanied by a live demonstration from several expert teachers showing why even world-class tactical shooters need to have empty-handed fighting skills—such as when you’re attacked without a weapon in hand, get disarmed, or are unable to shoot for fear of hurting a bystander.

In the myth-busting class, one of the first myths that the teachers busted was that fights last a really long time. In reality, most attackers want to complete their objective and get away as quickly as possible. And, even if two people wanted to fight for a long time, it would be very difficult. Case in point: the team did a drill with heavy striking for just 30 seconds and everyone was winded and unable to accurately throw their punches by the end of it.

One of the most important lessons was what makes a “soft” target—one that criminals will see as an easy opportunity compared to others. By learning what makes one person a more attractive target for criminals over another, it’s possible to avoid the behaviors and actions that lead to being seen as an easy target. 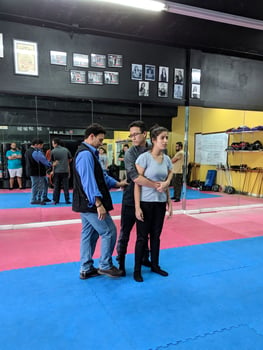 Aside from learning self-defense techniques, the self-defense class was a great opportunity for the team to get together and build friendships—both among the team and with the customers who attended the session. Just being able to attend the class, learn something interesting, and practice some hand-to-hand defense techniques helped everyone learn something about themselves and one another.

Another thing that the class helped build for everyone who attended was confidence in their ability to defend themselves. For example, if Victor Rodriguez (our Sales Account Manager) is in an abduction situation, he now knows some specific ways to cope with the situation and increase his chances of getting away safely.

While we all hope to never need to use the knowledge, knowing how to defend against an attack can be vital if a situation ever does come up.

The whole event was fun, educational, and a good bit of exercise that helped everyone gain some confidence and valuable information. And, we all look forward to more such events—both among ourselves and with our customers!

Compuquip Cybersecurity is proud to announce that Ricardo Panez is joining the team as our Director of Sales! As the Director ...

Check Point Software Technologies LTD is one of the most reliable and trusted security software providers in the industry. ...

Compuquip Cybersecurity is excited to announce that we’ve partnered with SentinelOne to deliver unparalleled endpoint security ...